The fire department formed in 1906 during a public meeting (Ft. Pierce Council) at the "Paxton" building to discuss the lowering of fire insurance rates (Ft. Pierce Fire Department). WE. Tylander was appointed the first fire chief during the meeting. It was said that Tylander was more of a figure head and politician than a true fire chief. R.E. Mims, once thought of as the first fire chief, was appointed the first foreman (officer) of the new engine company during the meeting.

The first budget was set at around $1,000. The first fire engine was ordered during the meeting (A Howe Number 38). The cost was roughly $2,000 made through payments of unknown description. 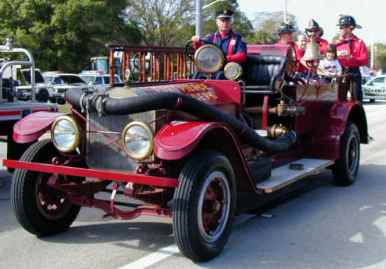 
The new organization consisted of 33 volunteers (16 assigned to the engine company and the remaining on the two hose companies {reels}). The firefighters were notified through a steam whistle located on the city power plant. In 1910, the fire department was undergoing some setbacks and a reorganization meeting was held, where once again WE. Tylander was appointed Chief. At this meeting, a second pumper was approved for purchase.